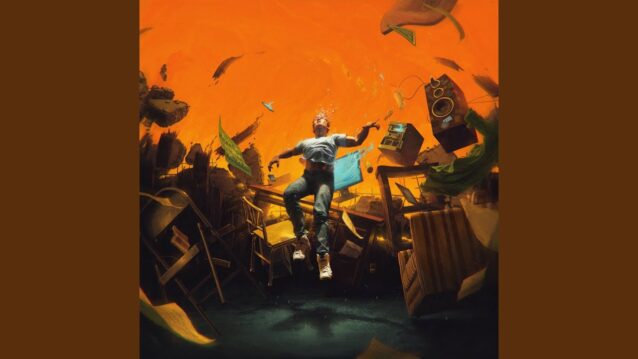 Yeah
Depression, anxiety got ahold of me
‘Cause people say they want the older me
Well, I’m thirty, this the oldest me
Behold it’s me, the piece of shit that’s not good enough
Not black enough, not hood enough
Not rich enough, not poor enough
My heart has poured enough
I been beaten and battered, my confidence shattered
Been broken and tattered
I’m constantly second guessin’ if my profession is worth it on my mental state
Writin’ this from a dark place with humility and grace
Peace, love, and positivity was my nativity
But now when socials are in my vicinity
I’m not runnin’ from the internet
My god, I was at his birth, I’ve been a vet
Goin’ berserk like Peter down at InterTech, yo, ayy
It’s deeper than the surface, I’m searchin’ for purpose
I’m tired of searchin’ for logic and Googlin’ purposes to read that I’m worthless
I remember makin’ music alone, just a pen and a microphone
But nowadays it’s hard to get in the zone
Writin’ rhymes was easy before the fame
But now I’m constantly overthinkin’ every line, it’s a shame
Rap used to fill me with joy, now it’s nothin’ but pain
I’m stuck in the game, tryna get back from where I came
I write this letter for the person who’s listenin’
Fed up and tired of people dismissin’ ’em, I’m with you
I been through what you been though
No amount of money can take away the feelin’ of insecurity
Only though maturity can we overcome
Feel like I’ve been overrun, feel like it’s over, I’m done
Whoever told you success gon’ make you happy? You been lied to
All of my dreams came true but I bleed and cry too
Never been perfect, I failed everytime I tried to
Feelin’ hated and underappreciated
Everytime I look in the mirror, I wonder, “Why you?”
Shit, I’d love to end this on some positive shit
Hit you with punchlines instead of some derogative shit
But it’s okay to be sad sometimes and tired of shit, I guess

And people say, “Well you’re just out for money”
I say, “That’s none of your business”
You see, a lot of people don’t feel happy
Unless they have another thing beyond money, which is called status
And status, to a very large extent in our economy consists in
In having this thing, that thing, the other thing, and having a swimming pool
A, uh, Ferrari, uh, some kind of clothes and uh, some kind of house
And so on, and so on, and so on
And we think, uh, we need all that
Because we haven’t asked ourselves whether that was what we really wanted
They all think they gotta have this, they gotta have that
And uh, they don’t really want it
If they sat back and considered, “Do I need all that? Is this trip really necessary?”
They would come to the conclusion it wasn’t, ha-ha-ha-ha-ha